No that isn’t a typo and I’m not sending a distress signal to my fellow mom-friends. Although I could always use some extra assistance these days. HELLP with the extra “L’ stands for Hemolysis, Elevated Liver Enzymes and Low Platelets. I know. It’s quite a mouthful. In simple terms it is a complication of pregnancy that increases your risk of excessive bleeding (prevents clotting) and potential liver failure. I was diagnosed with HELLP Syndrome with my first pregnancy in 2011 at 28 weeks. It is by far the scariest thing I have ever experienced in my life.

We lived in Charleston, SC at the time. My mom came to visit for the weekend. I was excited because the plan was to finish the nursery, do a little shopping and cap it off with a visit to the Ob/Gyn so my GiGi could see her first grandchild on ultrasound. The weekend went well. We finished the nursery! It was beautiful. It was extremely HOT!!! If you’ve ever been to Charleston you know that the heat can be stifling. To the 6mo pregnant lady, it felt like someone had turned the thermostat straight to H-E-L-L. Despite the heat, my mother and I went shopping at one of those indoor/outdoor type malls. I had to sit and rest in every store but that was normal for a pregnant woman. Right? That was Sunday.

The next day my mom, hubby and I made our way to the office. I did the routine blood pressure , weight check and pee in the cup routine. We waited for the ultrasound and physician exam. I recall making it to the ultrasound and getting to see Baby K in action. But it was all cut short. I needed to see the doctor the tech said. I remember thinking that the nurses seemed to be congregated together speaking in excited but hushed voices. I overheard one of them say “I’ve never seen numbers that high before…like EVER.” When I got into the exam room my Dr. told me I needed to go to the hospital…right away. That my protein levels were too high. I would need to be evaluated. She even gave me a hug. It was all very weird. There wasn’t any further explanation. It never crossed my mind that all of this hoopla meant I was going to have a baby soon.

We were so oblivious that my hubby actually dropped me off at the labor & delivery unit while he took my mom to the airport for her flight back to Atlanta. Before he could make it back, things had changed. The nurses had taken my vitals and drew several vials of blood. I received my first IV. The on-call physician came in and explained to me that my protein levels were extremely high and that my platelets were below normal. I believe this is when I first heard the term HELLP. I remember him saying I would need to deliver the baby in the next 24 to 48hrs. I also distinctly remember telling him “Oh nooo. I will just go home and be on bed rest.” I must have said that more than once because he finally sat on the edge of the bed and explained really slowly that I had no choice or I would become very sick. I remember wondering how could this be. I didn’t feel sick at all. The baby was fine at every visit. I now know that the fatigue and swelling that I experienced and assumed were normal to pregnancy were related to HELLP. And then the tears came. I realized I was there by myself and wasn’t going home and I would have a baby REALLY soon.

I called DJ and told him to hurry back. I called my mom to update her. The nurse came in and gave me my first steroid shot. OWWEEEEE!!! It stung something awful. You get it in your butt cheek. It would help the baby’s lungs develop the nurse explained. Everything started to move really fast after that. Signing paperwork. Unhooking IVs. EMTs arriving. I was transferred to a gurney. My first ride in an ambulance. You see I had to transfer to MUSC because my hospital wasn’t equipped to care for babies born at such an early stage. It was actually an ironic turn of events, given I had been adamant that I did NOT want to deliver at MUSC because my husband worked there as a resident physician. No choice now.

I can’t clearly recall the series of events once I checked into MUSC. There were so many physicians and other medical staff coming in and out of the room. I know I received a shot of magnesium sulfate which is commonly used in severe pre-eclampsia patients to prevent seizures. It made me feel really weird. It was THE WORST ever. At some point I passed out while trying to use the potty they had brought into the middle of the room AWKWARD. After that there was no more moving out of the bed. I had earned myself a catheter and receiving one of those without an epidural is THE WORST OF THE WORST. There wasn’t much sleep that night with all the beeping and evaluations and before I knew it Monday had turned into Tuesday. I received the final dose of steroids.

After this point it was a waiting and watching game. Give the steroids a chance to work was the plan.  Continue to monitor my vitals and labs. A neonatologist came to discuss everything that comes with delivering a baby 12 weeks early. In my head I hoped DJ was taking notes because it was so much to take in. I don’t know if it was shock, denial or faith but I was never scared about the baby not making it. I somehow knew it would be fine. And no one ever let on how serious my condition was until long after I delivered. The option of induction was presented.  They had indicated that I could get Pitocin but that it may or may not work and if it did I may still have to have a c-section. Seemed like a total waste of precious time so c-section it was. We quickly told the OB that would deliver the baby that there was no reason to jeopardize my health or the babies attempting a vaginal delivery.

Wed. morning. May 26th. I was ready. It was just me and DJ. I was the first case. I remember Dr. Carly one of DJs friends/colleagues stopping by. She prayed with us. I later learned that she intubated Katelyn. Then it was time. DJ and I said another prayer. I wasn’t scared I was more nervous. The epidural didn’t hurt. Just a little pinch. I was surprised. You know you hear the horror stories so I expected much worse. There were so many people in the operating room. It was FREEZING and very bright. The c-section was so fast. I felt tugging and pressure but no pain at all. I remember funny smells swirling around. I didn’t cry until I heard her cry. She sounded like a small cat. DJ and I kissed. He went with her as they did whatever they do to put me back together. They announced she was 2lbs 2oz and 14 inches long. Wow. Look at God!

I didn’t get to hold her. They rolled me back to my room for recovery. My mom had finally made it to the hospital. She was in the recovery room. Maybe 30min later they wheeled our baby girl, Katelyn Janae Harris, into the room. She was in an incubator with a lot of plastic. I got to touch her little hand through these holes. She looked so funny to me. The tiniest thing I’ve ever seen. We had a baby! Whoa! It wasn’t long before they had to get her upstairs to the NICU (neonatal intensive care unit). A place that would become her home for the next 57 days. Over the next 2 days we watched my labs slowly return to normal leaving as if nothing was ever wrong. Katelyn seemed to have no major medical issues. She was just tiny. Praise God! I stayed in the hospital another two days to ensure that all was well with my health.

I could never have imagined THIS as my birth story. 12 weeks early. I had just mailed my baby shower invitations. A baby I couldn’t hold; delivered by doctors I didn’t know at a hospital I never toured. I never completed my new parent or breastfeeding classes. I felt robbed in a weird way. Going home without my baby girl. All the so-called planning. It was all surreal. It had been quite an unexpected journey. One that I hadn’t even begun to fully process. Today, 3+years later, I still work on coping but I thank God for seeing us through! 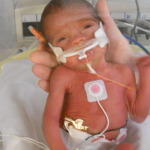 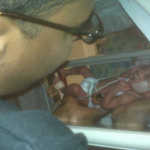 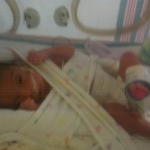 * HELLP occurs in roughly 2 out of 1,000 pregnancies. It is typically, but not always, accompanied by pre-eclampsia. It can be difficult to diagnose because many symptoms are also normal pregnancy symptoms. A person does not have to exhibit all of the symptoms. 1 in 4 women diagnosed with HELLP will experience it in subsequent pregnancies. To read more visit American Pregnancy Association or March of Dimes.

A STORY TO TELL