Christmas is a mere hours away. And while I genuinely LOVE this time of year, the anticipation has really taken a toll on our 4yr old. She has been inundated with commercials for nonsensical items strategically being aired during her most beloved cartoons since Halloween. If that weren’t enough, every store has had a Christmas display at their entrance perfectly staged for her demographic for months. Tactics that make a Target run (typically 20min) feel like 45min because “can I have this or that?” or “mommy wait look at that” are constantly coming at me as I try to concentrate on just what it is I initially came in the store to purchase.

The last two weeks it became abundantly clear that we were living in some alternative universe. Our 4 y/o had become obsessed or maybe I should say possessed by one item in particular. Her purse. Or rather her PURSES (with an “S”). We no longer knew what to expect from one day to the next. It was amusing at first but it’s possible that we may need an intervention. And as we draw closer and closer to Christmas I am silently praying that no one buys my child another purse. I present Exhibit A. And please be advised that the puppy dog she is holding is ACTUALLY A PURSE!!!! ARGHHHHH!!!! 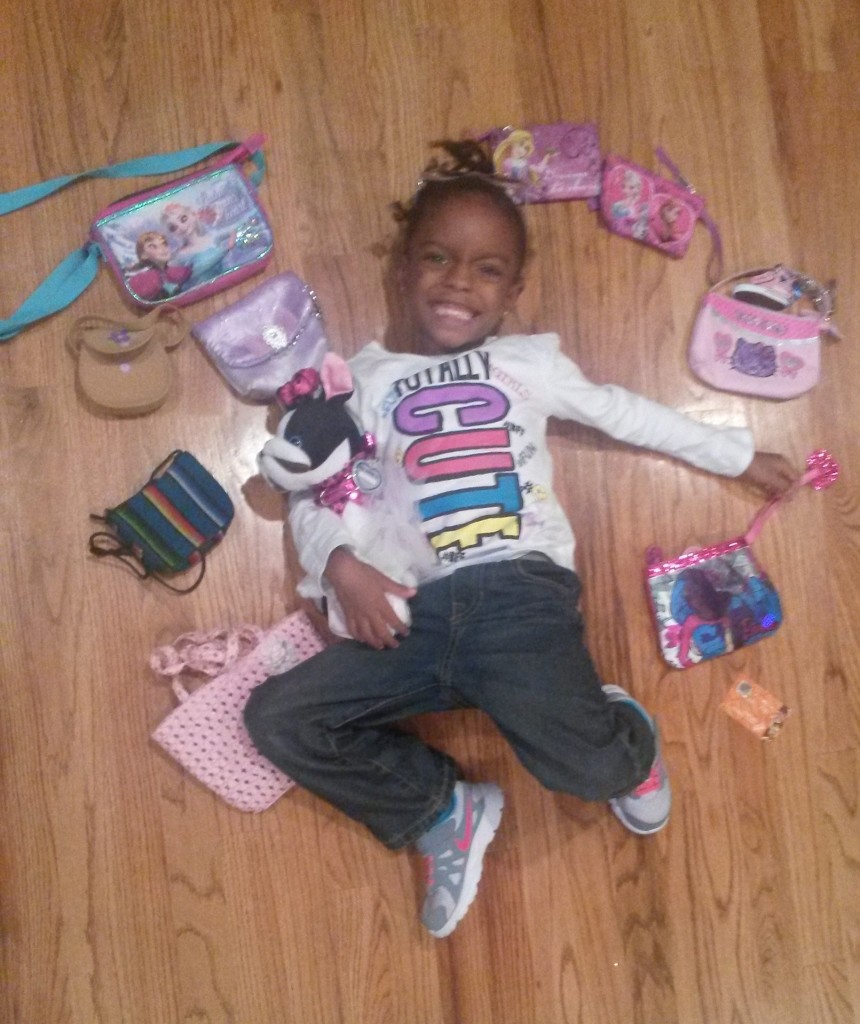 Here’s the situation…Granny gave her a purse about a year ago. Then her other granny gave her purse. Then she had a birthday and received at least 2 more purses. I lost count on how she accumulated the 10 other purses/wallets but it is most definitely not because we purchased any of them. So she has this large collection of purses. Started out innocent enough. Played with one here. Filled it with random contents. Move on to play with another. But then she started to request to take these purses on outings. And you couldn’t just grab one of the 10 purses and be out. Nope it would have to be a very specific request of the hello kitty purse with the sparkly front. I’ve told you all before that toddlers are a bit bipolar. Bring the wrong purse to the car and watch her go from 0 to 100 in 15s flat. “Nooooooo! I said I wanted the Hello Kitty purse with the red handle and the dot over the eye.” I’m sorry WHET?!? Switch it up and tell her to get her own purse and she was worse than an elderly woman with dementia. “I can’t find my purse! I don’t know where it is. Noooo not that one. The other one.” I could not keep up. At night she would want a specific purse to hang on the corner of the bed. And she NEVER understood why the purses could not go INTO school with her. It didn’t matter that we had the same conversation about it every morning. And she wanted to do everything with the purse. Going to the potty or washing her hands took twice as long because one arm/hand was rendered immobile from having to hold the “purse of the day”. Meanwhile we are looking at her like PLEASE COME ON!

By the end of November, we had had enough of the purse antics. We used the purses as a reward/punishment tool. If you don’t listen all the purses go away. It was clever. It seemed to work. It did not however reduce the obsession. Then we decided that we would use the purses to teach her about the true meaning of Christmas. We announced that she would be giving away a few purses to another little girl whose parents couldn’t buy her any purses. To our surprise she cheerfully chose 4 purses to give away (to which I added 2 more while she was sleeping) and we donated them to Goodwill. But wouldn’t you know the very next conversation she had with Granny she was asked “what do you want for Christmas?” And of course she said a purse because mommy and daddy made her give hers away. Cue the violins. She made it sound like such a sad affair. LORDT!!!! Sooo we already know one purse is going to be under the tree. Soo like the picture said SEND HELP if you can. At least pray for us! Somebody (or someTHINGS) may not make it into the New Year. Merry Christmas Eve everybody! May the force be with you!

Anything send your kid into a Christmas tizzy this year? Is there any item that you’re hoping is NOT under the tree?